I found myself bored and fidgety at 10pm Saturday night (yeah, I'm in at that time, what of it?) so I cast on for a new project. It should be noted that I currently have around 6 unfinished objects (that's a conservative estimate), but I also have Knitter's ADD, so I'm not going to feel guilty about this. 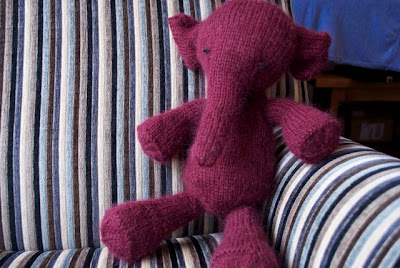 This is Elijah, from (who else?) Ysolda Teague. Here's the details:
Pattern: Elijah (ravelled here)
Yarn: Rowan Kid Classic in some deep red colour - why don't they give the colourways names like the other cool yarn companies?
Needles: 4.5mm DPNs. I should note that the yarn calls for 5.0 - 5.5mm, but it is a DK. I think it calls for bigger needles because of the halo, but I would go smaller even than 4.5mm as the stuffing shows through. Stupid Rowan.

This pattern is brilliant. I've never knitted a toy before, and this fella looks complicated, but the pattern is so well written that it's incredibly easy. I mentioned I cast on at 10pm Saturday - he was finished by midday Monday. I put a photo on Facebook and had a friend ask for one for his niece, so I've already cast on for that, in a baby-friendly acrylic. I'm so nice that I'm only charging him for the yarn.
A note about knitting for other people: I only knit what I know. If knitting a pattern involves learning a new skill, I probably won't do it on demand. I'll happily take it on when I've taught myself that skill, but generally I will only knit something if I know how to do it, it's super easy, and/or I love knitting it. In the past, I have knitted in exchange for artwork and chocolate, but I think charging at least for yarn is a good idea. It's always tricky to ask for reimbursement for knitting, particularly if I charged for my time - this fuzzy elephant guy would total over £60 if I was charging minimum wage plus yarn. I think he's sweet, but he's not worth that!
In non-knitting related news, I've been offered a volunteer placement with my favourite museum. It's going to be an amazing valuable experience, as well as a huge challenge. It involves a lot of responsibility and, ultimately, an event and exhibition which I will be largely in charge of. That's pretty mad.
Posted by Emma at 05:37

Emma
I've been knitting since Summer 2008. It has been a constant source of hate, frustration, satisfaction, joy and hunger for me.